A Fond Farewell to Cliona

Today is the last day of Cliona O’Leary’s tenure as Deputy Head of Sport – TV at RTÉ.

She has been a key player at Montrose since she first walked through the doors in 1997 but has chosen to take a step back and take time to work on the next chapter of her life and career.

She has featured in every year of our 50 Women of Influence in Irish Sport and has been that for as long as we have had the pleasure to know her.

Throughout her time at RTÉ she has been an editor on all the major sports and served as the away team leader at both the Olympic Games of Beijing in 2008 and Rio in 2016.

She has served as Chair of the European Broadcasting Union’s Women in Sport Expert Group, was RTÉ’s internal and external champion of the 20X20 Campaign and has been a powerful advocate for great sport, and for the role of women within that environment throughout her career to date.

She was a key player in ensuring that the exploits of the Women’s Hockey Team’s march to a first ever World Cup Final was shown on our screens and that the FIFA Women’s World Cup and the Irish Women’s National Team were part of our sporting experience.

She pushed hard to ensure that Camogie not only retained but expanded its place on the RTÉ summer schedule and that female voices became a regular and accepted part of analysis and commentary of Men’s and Women’s sports coverage.

She completed a First Class Masters Degree in UCD focused on the role of Sports Coaches in Young People’s Mental Health, and will for now have more time to put that into practice at Ranelagh Gaels GAA Club.

Her experience, knowledge and passion have been a guiding influence over sport here for as long as Sport for Business has been in existence. She has always been an advocate for what we do and a good friend.

We are not alone in wishing her well for whatever comes next and hoping that it will be something where we can cross paths again in a professional capacity.

HER Outdoors Week Off to Flying Start 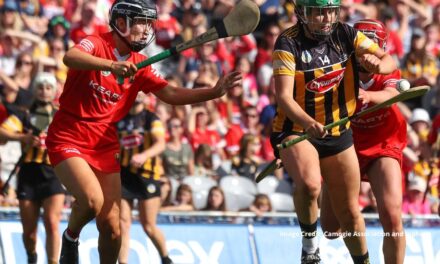 Camogie in Search of its Passionistas